The Festival of the Chariots is sometimes referred to as Ratha Yatra, literally meaning Chariot Festival. Ratha Yatra originated 5,000 years ago in India, on the East Coast state of Orrisa, in a city called Jagannatha Puri.

The Festival celebrates Lord Krishna’s return to Vrindaban and is held annually in the months of June-July to honor Lord Jagannatha, which means Lord of the Universe. Lord Jagannatha is a particular Deity form of Lord Krishna, fashioned from neem wood and brightly painted. The residents of Puri have been worshipping this form for many centuries. Five hundred years ago, Lord Chaitanya, the most merciful incarnation of Lord Krishna used to daily visit Lord Jagannatha in the temple and see Him in a mood of intense separation, much like Srimati Radharani who was parted from her beloved Krishna most of her days.

For the festivities; there are three chariots, one for each of the three deities; Lord Jagannatha, Lord Balarama and Lady Subhadra. The canopied chariots are decorated with flowers and balloons and are pulled with long, thick ropes by hundreds of people. The chariots are accompanied by a procession of devotees who are ecstatically dancing and chanting the Lord’s Holy Names:

This Maha-Mantra or great chant is found in the Puranas and Upanishads and is specifically recommended in this age of Kali as the means of God realization. Lord Chaitanya personally designated it as the Maha-Mantra and practically demonstrated the effects of the chanting.

The late sixteenth century text, Chaitanya Charitamrita, elaborately describes Lord Chaitanya taking a prominent role in the Ratha Yatra festival. Lord Caitanya (1486-1534) is the incarnation Lord Krishna in the aspect of His own devotee specifically for this age of Kali. He appeared in Navadvipa, West Bengal, and inaugurated the congregational chanting of the Holy Names of the Lord to teach pure love of God. Lord Chaitanya is understood by Gaudiya Vaishnavas to be Lord Krishna Himself. Lord Chaitanya was so beautiful that anyone who saw Him, became a lover of God.

The first time the Festival of Chariots was performed outside of India was on July 9, 1967 in San Francisco, under the supervision of His Divine Grace A.C. Bhaktivedanta Swami Prabhupada (1896-1977). Srila Prabhupada, as he is more affectionately known, is the Founder-Acarya of the International Society for Krishna Consciousness (ISKCON) and is the tenth generation from Lord Chaitanya. Srila Prabhupada lead the Hare Krishna Movement, guiding his disciples to open temples and perform festivals all over the world.

Srila Prabhupada first got the idea for performing the festival in San Francisco, while looking out the window of his room above Frederick Street. Noticing flatbed trucks passing below, he thought of putting the Jagannatha deities on the back of such a truck and conducting the Ratha Yatra festival. He had even sketched a truck with a four-pillared canopy on the back and decorated it with flags, bells, and flower garlands. And he had called in his disciple Syamasundara: Make me this cart for Ratha Yatra, Now, ready and sitting outside the temple on Frederick Street, was the cart – a yellow Hertz rental truck, complete with five-foot columns and a pyramidal cloth canopy. 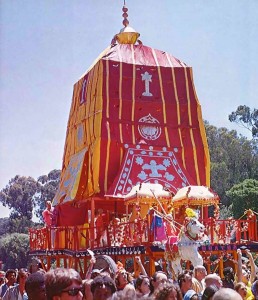 It was great! It was wonderful! It was a beautiful day, they said. And Prabhupada listened, moved by his disciples’ description of the celebration. Many hippies had joined the large procession. Everyone in the streets had liked it. The police motor escorts had tried to hurry the devotees, but so many people had crowded in front that the parade had been obliged to go slowly, just as Srila Prabhupada had asked. From the truck some of the women had handed out cut oranges, apples, and bananas, and others had thrown flowers. The crowds had loved it, and chanted and danced all day! 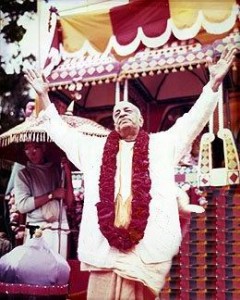 Come and join us this year for a full day of bliss, prasadam (spiritual foodstuffs) and chanting of the names of the Lord.